May 09, 2017
In CVE-2017-0167 Google Security found a Windows kernel information disclosure through the user mode callback user32!fnINLPUAHDRAWMENUITEM.  A sub-function of CreateWindow issues a syscall that in return calls a user mode callback with a copy of a data structure from kernel space.  This data structure is copied from the stack while executing in the kernel, and a portion of that structure is uninitialised, meaning that it can contain stale stack data that can be used to glean information from the kernel in order to defeat protections like KASLR.

Google Security included a brief write up of the bug and even supplied a PoC to demonstrate it, but didn't go into detail about how the bug actually works.  Given that the bug is actually pretty straightforward I think it's worth going into a little bit deeper and getting a better idea of what's going on under the hood and how an oversight as simple as not initialising a structure lead to a kernel to userspace information disclosure.

The analysis will be done on Windows 10 x64 binaries.

First, let's look at the call stack from the PoC blurb:

The call stack is truncated above the memcpy call and below the CreateWindowExW call but tells us what we need to know.  CreateWindowEx needs to draw a menu bar so it ends up syscalling into the kernel  The kernel renders our menu bar, and in order to pass the information back into user space it dispatches a user mode callback.  It's during this transition that the kernel lets a little bit of uninitialised stack data sneak out into user space.

As a side note, if you're curious as to why we end up rendering the menu bar in the kernel, a good article on the reasoning can be found at https://www.microsoft.com/resources/documentation/windowsnt/4/workstation/reskit/en-us/archi.mspx?mfr=true .  Basically, in NT 3.5 there was a separate graphics subsystem in user space but this system had considerable overhead due to the frequency and volume of graphics calls.  Windows NT 4 moved portions of window rendering into the kernel for these reasons, limiting the number of syscalls, context switches, and inter process communication and messaging that had to occur in order to do simple drawing.

Back to the bug - within the kernel, xxxSendMenuDrawItemMessage passes a pointer to a structure on its stack to MNInitDrawItemStruct for initialisation: 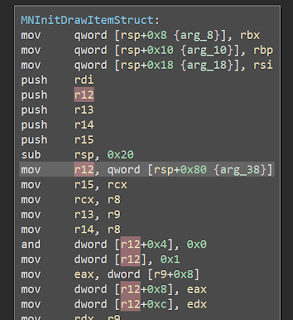 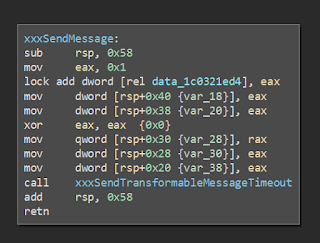 xxxSendTransformableMessageTimeout calls xxxSendMessageToClient with a pointer to the buffer in r9 as well. 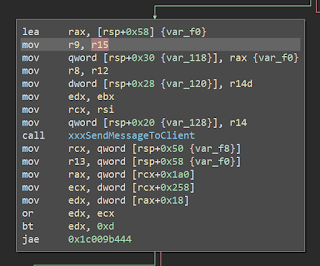 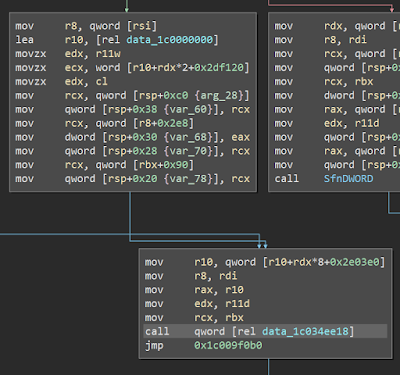 Which is a stub that is just 'jmp rax'! 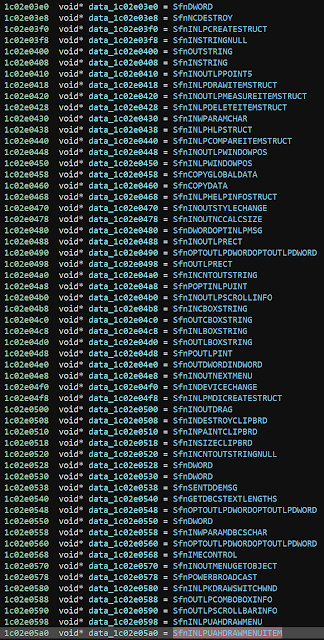 And we see that the function we're interested in, SfnINLPUAHDRAWMENUITEM, is in that table, so that's how we get to it.  Conveniently, the pointer to that structure with the unitinitialized data is, again, passed to this function as the 4th argument - in r9.

Within SfnINLPUAHDRAWMENUITEM we see that a structure on the stack is memset to 0.  var_f8 appears to be a structure of size 0xb8, and farther down the function we see elements from our structure from xxxSendMenuDrawItemMessage being copied into this structure. 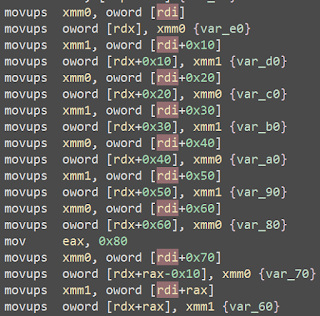 So at this point we have a structure with stale kernel stack data being passed back into user space.  When Google Security tested this bug on Windows 10 x86 they found portions of an exception handler related structure in that stale stack data which included absolute pointers to kernel functions.  This information could be used to infer the base address of a loaded module in kernel space and defeat KASLR.

The patch for this bug is in xxxSendMenuDrawItemMessage and it's very easy to spot.  Near the beginning of the function we see a new call to memset that zeroes out a buffer of size 0x90 on the stack.  This is the structure passed to MNInitDrawItemStruct that eventually makes its way through  SfnINLPUAHDRAWMENUITEM and KeUserModeCallback back into user space that we've been following this whole time.

I can't blame whoever wrote this function too much for this oversight.  The structure is passed into MNInitDrawItemStruct, so it might have appeared to get properly initialised, and given that the information disclosure is done through an undocumented internal function called by CreateWindow it's no wonder that it went so long without being discovered.

I've seen a lot of descriptions of the bug that Wannacry and now NotPetya leveraged to worm its way into the spotlight, but most of them are pretty vague.  Descriptions range from "logic error" and "buffer overflow" to Trend Micro's post that actually called out the actual bug - a casting error.  But even the Trend Micro post, which went into pretty good detail, didn't show the actual code that the error resided in, only a high level disassembly. There also seems to be some disagreement on where the bug resides in Windows 10.  One of the first people to analyze the Wannacry bug and do a write up on it posted his analysis to Reddit and was excoriated in the comments over it because of an error in where he thought the bug was in Windows 10.  Long story short, someone insisted very strongly to him that his analysis was wrong, and he eventually took down the analysis entirely  changed the URL of the analysis and posted an errata regarding the location of t
Read more
September 11, 2017